Anatomy of the OTO

Overview Updates (1) Reviews (1) Discussion
This is not a guide to tell you how to OTO any particular type of bank. Rather, my hope is that by explaining how it actually works, you can gain a better understanding of what you're doing with an OTO, and use that to improve and innovate on your work. 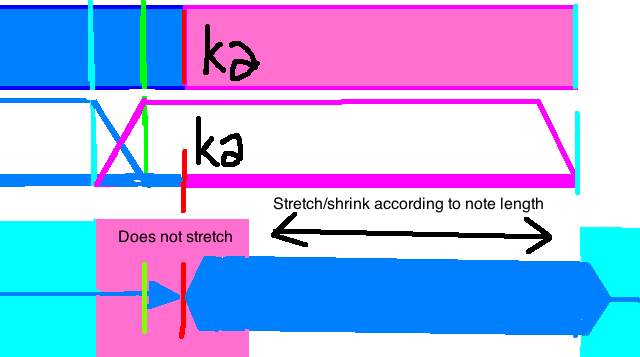 In the top row is the view without envelopes, the view in UTAU by default.
The middle row has the view with envelopes, the view when you switch to Mode 2 or click the tilde (~) button in the bottom left. The shape of the envelope reflects the audio level or volume of the note. When slanting up, it fades in, when it's horizontal it's steady, and when slanting down it fades out. The beginning and end of the envelope do not necessarily match with the beginning and end of the note.
The bottom row is the view in the OTO editor itself. The lines from the oto editor have been overlaid on the note drawings to show where those parameters would fall in the context of an actual UST.

The pink region is called the fixed region, but it is referred to as fixed in UTAU-Synth. This is because this is the part that does not stretch or shrink when the length of the note is changed in the UST. However, it is presumed that consonant velocity, a per-note value, is controlling that. It is measured in milliseconds relative to the offset.

The white space between the fixed region and the cutoff/blank has no name, but is nevertheless important. It is the segment that is stretched or looped by the resampler when the note length is longer than the original audio recording.

When accessing note properties in a UST, it is possible to change the preutterance and overlap. STP adds that number of milliseconds to the currently set offset.

I've heard that, based on the actual lengths of the notes in the UST, these parameters may change. I don't know the exact numbers or ratios, so it would be a much appreciated addition to this resource if that's properly found out. Additionally, the function of consonant velocity was speculation on my part. Precise information would also be appreciated.

Because of the relationship between OTOs and envelopes, I may add information about the envelope buttons and envelope editor in the future.

Thank you for reading!
Reactions: IDOLTRASH, Aeroza, Mooncat and 8 others

This was a very interesting read and I'll definitely be saving for future use. I like that the OTO is explained in a very clear and concise way, and that all the terms are broken down in a way that's easy to understand for beginners. This makes me feel like I could actually attempt OTOing because I have a much better understanding of how the OTO works.
Upvote 0 Downvote
Read more…
Top Bottom