Overview Reviews (1) Discussion
Hey everyone, I'm Cdra and people keep asking me how I EQ things. So, I decided I'd give you guys a cheat sheet on what I know about equalizing.


BUT FIRST: Why is EQ important?​
Equalizers are one of the two key components of mixing vocal tracks, the other being compressors. In a nutshell, compressors even out the volume of the track and equalizers cut and boost different frequencies in order to make the vocals even more balanced and clear. It's all about being audible over the music, but not too loud, and everything being consistent, clear, and pretty.

Basically, every track you produce should have these two things applied to it, because they're super important.

I'll talk about compressors if anyone's interested, but for now, EQ.

So, the right EQ for a voice can change a cover from nice to WOAH in one fell swoop. It can make or break a vocal--it even replace flags in its effect! It's really one of the greatest tools at your disposal while mixing, so learning to use it is crucial.


NOW FOR THE ACTUAL TUTORIAL.​
So, I always EQ after I compress, though I don't think it matters which you do... it's just easier to hear how your EQ worked after the compression. Also, equalizing is a slightly more complex process, so it's better to do second IMO.

Let me show you some different equalizers: Audacity's Equalizer, Reaper's ReaEQ, and FL Studio's Fruity Parametric EQ 2. These equalizers COME WITH THE PROGRAMS, so they're really accessable and stuff. 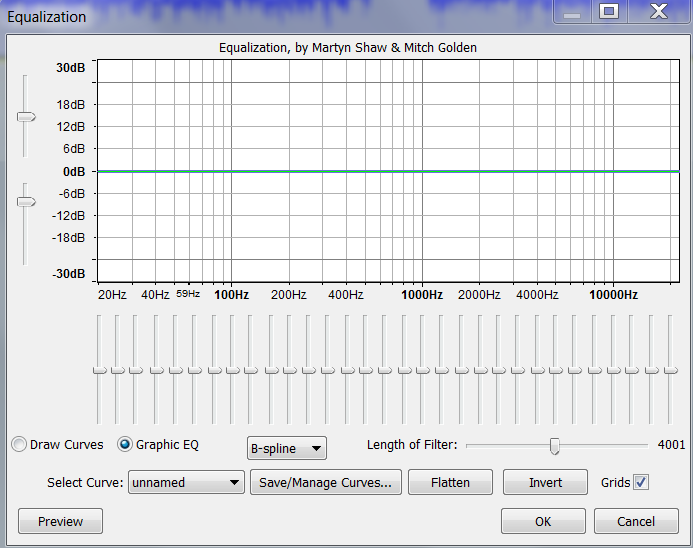 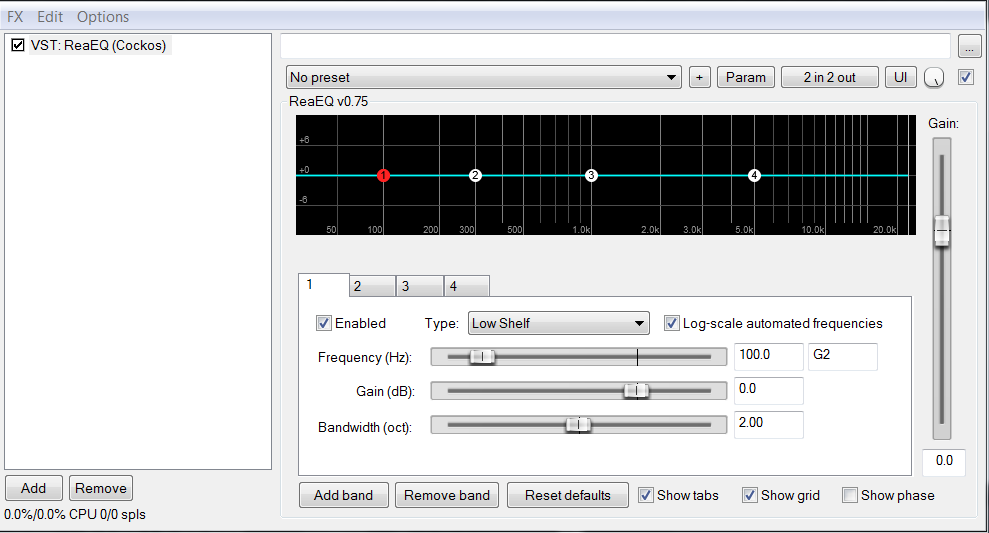 (you can right-click to add more bands for more precise EQing here, which is really good to know owo) 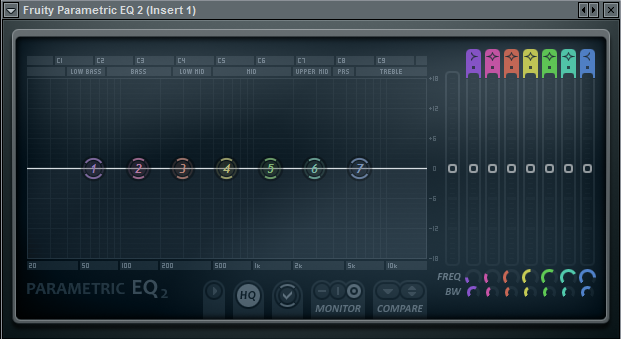 They all have pretty similar parameters, as you can see, so anything I say here will apply to all three.

What makes these equalizers different, though, is that the Audacity EQ doesn't have a visual frequency display, and you can't listen to your track while you're EQing. Which is an incredibly awful letdown to me. That's why I recommend the other two; Reaper's trial version is free, full, and indefinite, so if nothing else go grab that... I promise it'll help. STILL, you can definitely use Audacity's EQ if you really wanna or can't use the Reaper trial for some reason, the results are just a little less precise.

Now then, all of these have some parameters on there I don't know exactly what do and honestly, they aren't all that important. The EQ curve is all you really need to worry about. Basically, you're going to boost and cut frequencies according to the effect you want for the song, and also according to the voice you're EQing. Here's a list of your basic frequency ranges for ease of use:


The ranges not specifically listed above don't do anything of note--increase them if they seem quiet or decrease them if they seem loud. (NOTE: you'll need a visual EQ to tell this, but if they seem uneven, balance them out). That is to say, the mid-range is just most of your vocal tone and the highest range is usually noise and more consonant-y things... so it's not too important to worry about them excessively.

So... that's basically EQ in a nutshell. I'm going to take some screenshots of some EQ curves I use for a few different voices and song types, to give you an idea of how they look. 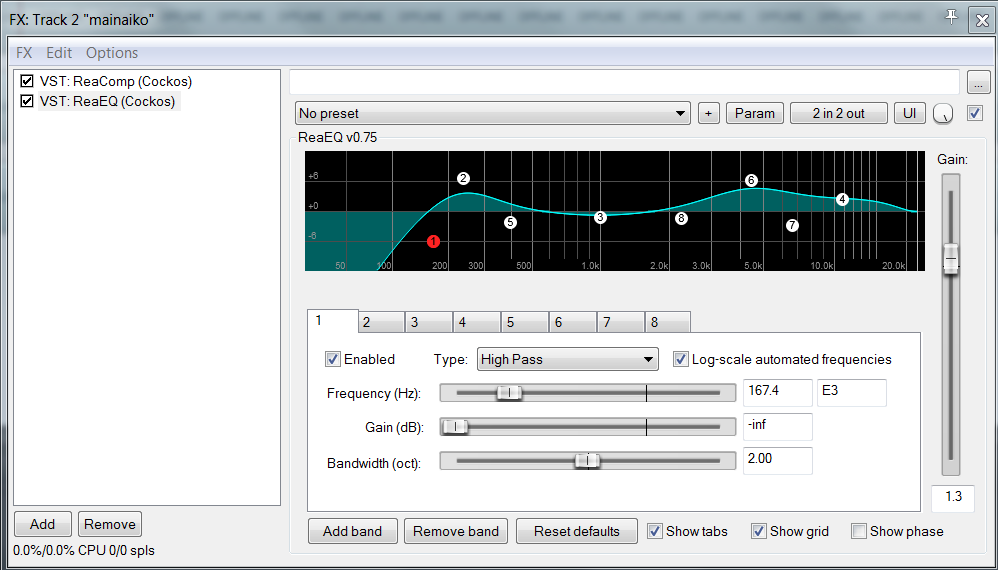 The EQ curve for Aiko Kikyuune singing "Tell Your World", as done in Reaper. This is a strong female voice singing a pretty strong song, so I'd call this a fairly standard curve. 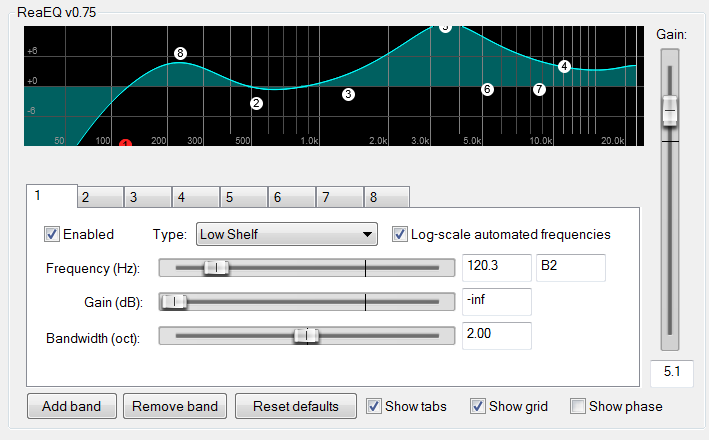 Another ReaEQ curve, this one for Halt Tanner singing "Paranoid Doll". This EQ curve is for a soft, mature female voice singing a pretty loud song. 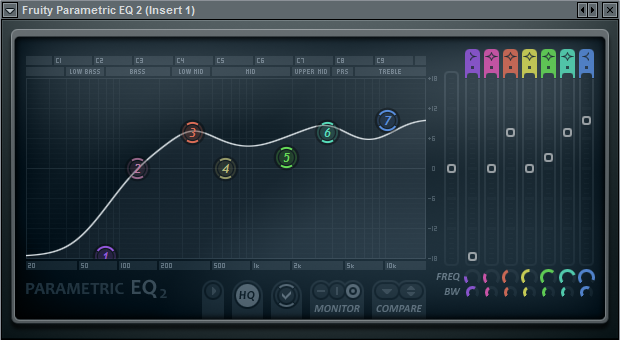 This is a Fruity Parametric EQ 2 curve for Cody Akiyama DEVELOPED singing "Babylon". It's for an energetic male voice singing an energetic song. 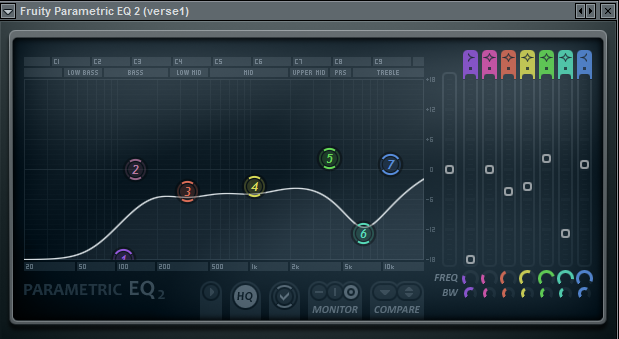 Here's a really funky curve used for Halt Tanner singing "Safe Word". It's a softening curve, mainly intended to give her voice a smoky, breathy tone. Just for fun, here's a stupidly fancy double-EQ I used for a male voice singing Bacterial Contamination. The low parts were so low that I had to use both of these curves to get him clear and not noisy as heck; the top EQ was muted for the higher parts that were more in his range.

I don't have any pictures of the Audacity Equalizer in use, but I never use it so :< You can copy these general curve shapes between different equalizers, but you'll want to tweak each curve individually to make your specific vocalist sound AH-MAY-ZING.


So yeah! I hope this has been somewhat helpful, feel free to ask me questions about EQing! I love doing it and playing with curves is fun... if you want, I'll even help you find an EQ curve that really flatters your UTAU's voice. Don't worry, I won't bite~

Again, if you people wanna know more about compressors, too, I can write about that if there's some demand ovo;; I just love EQ, so I wrote this.
Reactions: Pilot, Sunny, noxyoursox and 3 others

Thanks for the article! It was really helpful!
Now Annushka can sound good hehe
Also, Audacity now comes with a option to see how the eq sounds
Upvote 0 Downvote
Read more…
Top Bottom