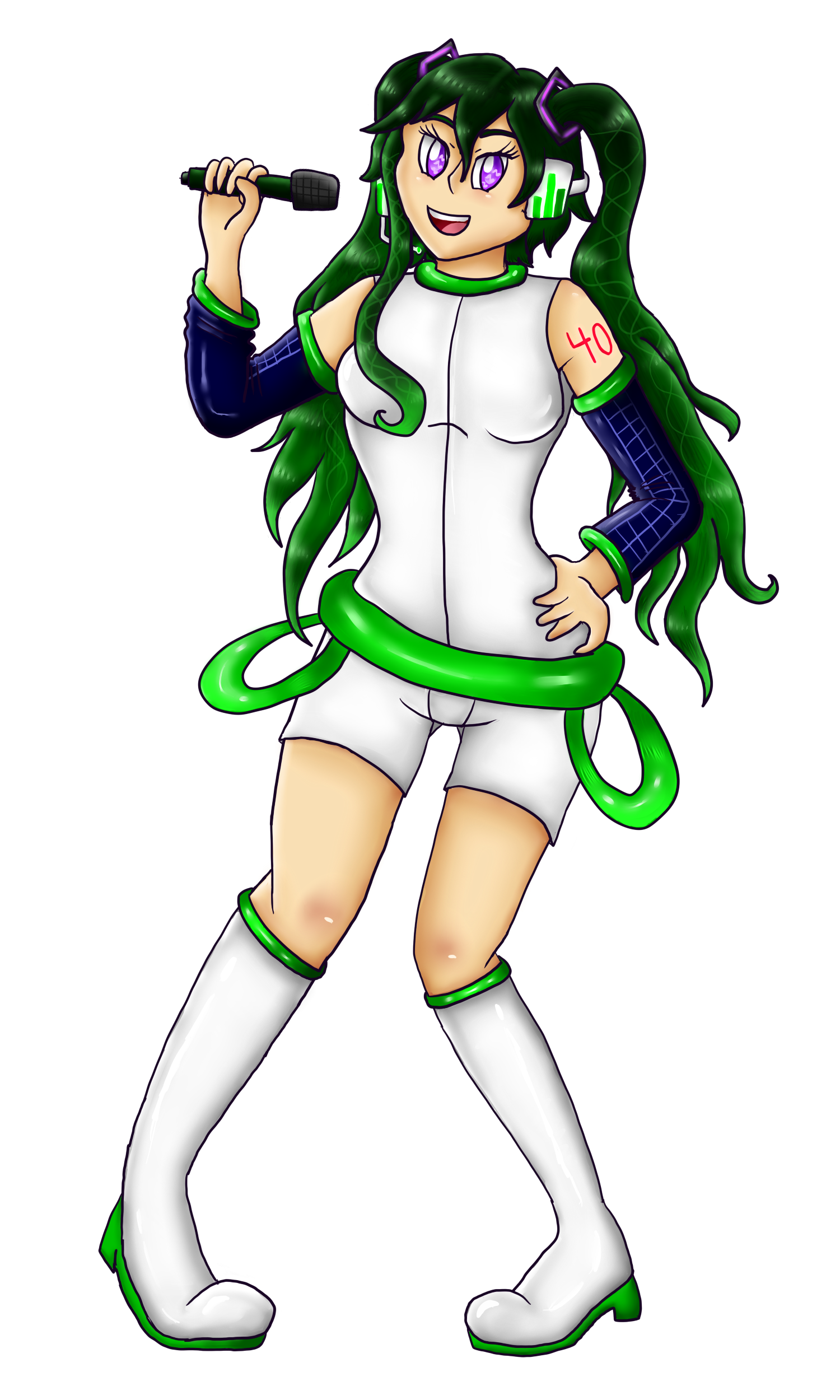 Merodi Ongaku is a clover based UTAU that is a bubbly and outgoing girl. She has a tendency to ramble and worry. She is a cyborg and had a special feature called "Combat Mode" and has a battle axe in the shape of a clover as a weapon. She lives in a small town called Harmony Town next to Rizumu Teion, her lover and her manager. She performs at small concerts in town. Merodi is afraid of insects and weed killer. Merodi is also based off a childhood memory of being in my backyard and collecting clovers.

If Merodi falls asleep while in her append Sweet outfit, the flowers in her hair and on her waist will close up. They will rebloom again when she is awake.

Merodi requested Atir if he could program in Combat Mode for her too. She wanted it to help save Rizumu.

Merodi is a worrier and she often rambles a lot.

Merodi has a strong grip. Its hard to pry her off if shes holding onto something.

Merodi's flowers on her head arent actual flowers. They are synthetic material that looks like flowers and feel like real flowers. They have bioluminolesent so they glow in the dark. They are also powered by Merodi's brainwaves and vital signs.

The flowers also give off scents as a defense mechanism. Merodi can use these scents to attract, repel, or knock out someone.

Merodi's DNA is synthetic but she has plant DNA in her body and plant cells. She can gain nutrients through photosynthesis if she wanted to but prefers to eat actual food.

Merodi, although programmed the same as Rizumu, can't read binary very well. She however, can sense the nitrogen in the air, because clovers regulate nitrogen levels.

Hair: Long dark green hair with a long stray hair on the right side sometimes in a braid. Lighter green highlights, sometimes wears in pigtails.

Headphones: white square headphones with green spectrum bars that move vertically. Small Mic and headband is in the back of her head rather than on top.

Append Sweet Outfit: dark green tube top but separates into 4 pieces near the bottom, light green skirt with white apron and lighter green frills on the bottom. Dark green flat shoes with a bow and lighter green bottoms. Black collar with a yellow voice stone. Three leaf clovers on her hips with yellow flowers blooming from them. Two 4 leaf clovers on her head with pink flowers blooming from them.

Blue Moon Outfit: a white, sleeveless button up shirt with a dark blue and purple gradient poncho that has a white crescent moon and stars on it. Her voice stone is dark blue with white specks like small stars on it. She wears a lacy layered skirt that is also gradient purple with white star specks and a short skirt underneath that is dark purple to lightish pink. She wears lacy wrist cuffs and gradient purple stockings with gold crescent moons connected around her thighs. Her shoes are also purple and blue with a full blue moon on the toe part. Her hair clips, despite her hair being down, are light blue crescent moons that have blue faded flowers growing from them. Lastly, she has a moon belt with a full blue moon in the front, lavender quarter moons, magenta half moons, and two light blue crescent moons with yellow flowers growing from them. They function just like Merodi's Sweet append. Her battle axe also turns blue with a blue moon on it with the flowers.

Merodi Ongaku is a Cyborg girl that was born from Rita's computer. She started as a single sound but managed to create new sounds until those sounds became words. Became a voice. This voice began to form thoughts until it developed into an AI. This AI became smarter and evolved into an AI brain. A body made of synthetic material was created for this AI. During the creation of the body, a plant DNA got mixed in. Synthetic cells were copying the plant DNA and it was thought the AI would not compute with the body but surprisingly it was still functional. The AI was transferred into the body and the hair like fibers went from black to green. When the the body was finished it still functioned as normal. It was a success. The number 40 was tattooed on the body's left arm and then shipped off.