Miyuki is a prominent alien from the planet Zecersonia. She is Zecersonian royalty and a space cadet, and the first Zecersonia to come to Earth. Despite being considered very intelligent on her home planet, she failed to do essential research on Earth and human culture, and misses many basic things about human life. She was taken in by four teenage guys: Saito, Kiigire, Kuza, and Tatsuya. The five of them formed a band, named December Arrest, which plays nu-metal music. Miyuki learns as she goes, and despite her bandmates trying to keep her a secret from NASA, the band becomes inexplicably successful, and are usually in the limelight. Miyuki has Aspergers Syndrome, and is in the small percentages of savants, her savant skill being robotics. Miyuki has built an android herself, named Yuina. Miyuki has a younger sister named Mieko, and their parents are Hayate Nori and Hanae Masara. Miyuki is usually serious and speaks coldly, yet civilly, especially to those she's meeting for the first time. Around her bandmates, she's roped into horseplay and other shenanigans.
Click to expand... 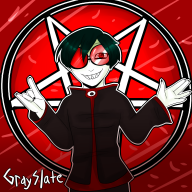 Edited the images to show her face
Click to expand...