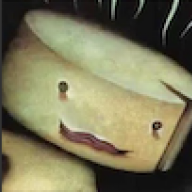 Hi, I've been trying to get the UTAU app to work since yesterday but I'm having a bit of trouble. I joined the forum in the hopes that some of you folks might be able to help me get started.

Basic information:
I'm running the UTAU app on my mac, OS is Catalina 10.15.4
Since it's a Windows program, I'm using the wineskin winery app to make it usable on a mac. Yes, I know there's UTAU-synth which runs on mac, but I chose to download the windows version and run it through winery because there's more resources available for the windows UTAU app. The app itself is mostly fine. I've been able to do stuff like convert the app to english and download voicebanks/plugins.

The first issue I ran into isn't a really big deal since it involves the Defoko voicebank, which I wasn't planning to use anyway. I couldn't get Defoko to sing, so I looked through the program files and figured out why. When the app was installed, all of Defoko's voice .wav filenames were converted into mojibake. I added a hiragana keyboard and tried renaming one of the files back to "あ.wav". This worked and the app became able to use and recognize that particular file. But I don't really feel like manually renaming all of Defoko's voice files if I'm not gonna use her anyway.

I decided to try downloading other voicebanks to see if I would run into the same problem. Interestingly, I got a different result. I downloaded Namine Ritsu's "kire" voicebank and inside the main folder were two folders, one with a mojibake'd title and the other with a title in kanji. The content of these folders are identical files, just with different names. One has the proper files with hiragana names and the other has the same files, but with their names in mojibake. The app just seems to ignore the mojibake'd subfolder and does recognize the stuff in hiragana. I know the app is reading these files because I can go into voicebank settings/voice configurations in the app and play the audio which is in the files.

I also downloaded Denatsu Sora's "bloodmoon" voicebank, but I haven't been able to get it to work. I think it's because it has a weird subfolder scheme going on and I need to reorganize it. I'm actually not sure how I got Ritsu to upload right, so if anyone could remind me of the following that would be nice:

Although I have the one Ritsu voicebank, I haven't been able to make any sound in UTAU. I think this is because I'm writing in the lyrics incorrectly. The only lyric writing system I'm pretty sure I understand so far is CV, but this voicebank definitely isn't CV.

So if you wanted to write, say, "pepino melon" in various lyric systems here's how I'm guessing it works

CV: pretty straightforward it's just like normal syllables in japanese. so you would go something like"pe-pi-no-me-ro-n"

VCV: this is most confusing to me. Would it go something like "?pe-epi-ino-ome-ero-on"? What confuses me most is what's supposed to go before parts that start with a consonant like the "?pe"

CV-VC: My best guess: "pe-ep-pi-in-no-om-me-er-ro-on" Forgive me if that looks confusing

So if anyone could take the time to read this and get back to me, I would appreciate it a lot. I will probably still have questions later on, but I think these are my biggest barriers to getting started. Sorry if any of these were silly questions, and thanks for your time

Supporter
Defender of Defoko
To fix the mojibake issue, you will need to delete and completely remake your wineskin.
Whenever you download UTAU-related ZIP files, be sure to unzip them using Unarchiver instead of the default utility. https://theunarchiver.com/
Once you set up the new wineskin, BEFORE installing UTAU, make sure to set the locale with this custom command. 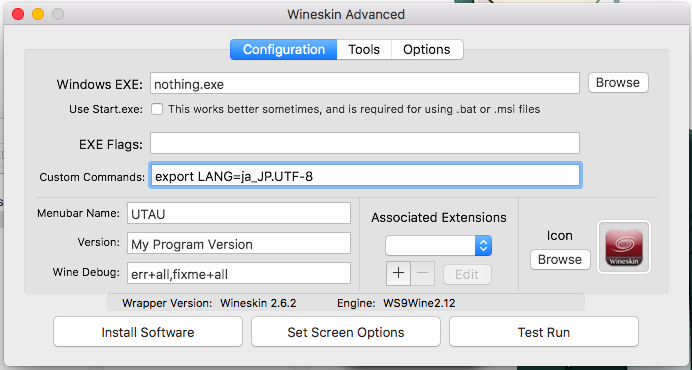 With correct locale and the correct decompression utility you should be able to use UTAU and Japanese voicebanks with the correct text encoding.

Kiyoteru said:
To fix the mojibake issue, you will need to delete and completely remake your wineskin.
Whenever you download UTAU-related ZIP files, be sure to unzip them using Unarchiver instead of the default utility. https://theunarchiver.com/
Once you set up the new wineskin, BEFORE installing UTAU, make sure to set the locale with this custom command.

With correct locale and the correct decompression utility you should be able to use UTAU and Japanese voicebanks with the correct text encoding.
Click to expand...

Hi, thanks for your response. I really thought I had used the custom command when setting up, so I guess it must not have gone through if I'm still ending up with mojibake. I'll try remaking the wineskin wrapper and using the unarchiver and see how that affects things.
You must log in or register to reply here.
Similar threads