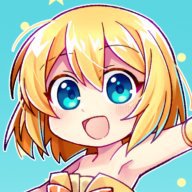 Defender of Defoko
Honestly I have no idea where to put this so I put it in the "random" category, BUT

I had an idea for an UTAU that's specifically a cover-UTAU.
In my mind, I imagined an alien who comes to planet Earth, disguised in a human form. This alien doesn't know any languages on Earth, so she can only replicate speech. This is where covers come in! Covers are like replicated speech, aren't they?
Its kinda sad that in theory, this UTAU could never have originals, but I bet if people really wanted to they could probably come up with a loophole or two.