Namine Ritsu CVVC English alias guide - A list of the vowels and add ons you will find in Ritsu's CVVC voicebank, along with word examples.

Within Namine Ritsu's CVVC voicebank, there is an extra folder called "eigo", which contains a couple of extra English sounds. I have recently been working with this voicebank, and made myself a basic guide to refer to. Since I don't see many people talk about this library, I figured I would leave my findings in the resource section just in case someone else wanted to use the voicebank, but didn't know where to start.

The English folder can be combined with Ritsu's other voicebanks, such as...
Click to expand...

Supporter
Defender of Defoko
Do you think it would be useful to have an OpenUtau phonemizer that can automatically make use of these extra samples? 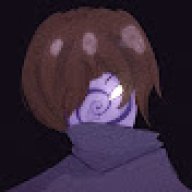 Kiyoteru said:
Do you think it would be useful to have an OpenUtau phonemizer that can automatically make use of these extra samples?
Click to expand...

It would reduce time working with her (and similar banks) so it could be worthwhile. It could also be expanded if this ends up popularizing in any way the idea of having said English extras.

Supporter
Defender of Defoko
I've discussed the idea further with another OpenUtau developer and we've decided not to proceed. The recommended workflow is to select the EN to JA phonemizer, then adjust aliases by double clicking on them for specific phonemes.

These are the reasons we've decided that a dedicated phonemizer won't be necessary:
- The EN to JA phonemizer can already create a usable base for english lyrics with this and all other Japanese voicebanks
- This specific voicebank is not particularly popular among Ritsu voicebanks, and it's still mainly a Japanese voicebank, not a full English voicebank (such as Teto's english voicebank, which does have a phonemizer)
- Ritsu's voicebanks do not automatically combine, so it would be difficult for most users to merge it with another preferred voicebank
I

Thread starter
While it’s sad to see you won’t be proceeding, I understand why you’ll be passing on this one. When most people are using Ritsu, they’re looking for the power that comes with their KIRE voicebank, which is not something their CVVC voicebank has. The sound is similar to their original cv and vcv voicebank, which has a softer tone. This also means that if you combine voicebanks, the transition between the english extras and the other notes is pretty jarring (speaking from experience).

That combined with the fact that it’s a custom reclist doesn’t make it super worthwhile to learn for only a small improvement. Unless you’re making an English original or something along those lines, would say using their Japanese Voicebank to make Engrish is probably a better choice. While I will continue to be using it (i’m already using cvvc for engrish to begin with) it’s probably fine just being a niche thing. Its a shame though, I really do feel like more people would be interested in it if it had a normal reclist and was a little bit easier to use.
You must log in or register to reply here.
Similar threads